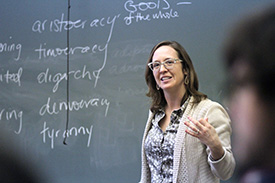 Originally posted on September 27, 2018 on the Wabash College Teaching and Learning blog.

At the 2018 Wabash College Opening Workshop, organized by members of the the Teaching and Learning Committee, faculty and staff gathered for a set of conversations about teaching which to launch their academic work for the year. Their focus was on what it means to be a liberal arts college for men, and what it means to teach men. The conversations began with an introduction by Dr. Adriel Trott, reprinted below.

At Wabash College, we define our mission in terms of teaching men. [In this workshop,] we want to think together about how teaching men leads us to shape our pedagogy and our curriculum. I am probably not saying anything that is news to any of you when I say that teaching men in a single-sex student environment is not the same for students or for faculty as teaching women in a single-sex student environment is. And these differences have much to do with the ways that men and women have historically existed in the world. Institutions with all-women student bodies largely aim to give women opportunities to be recognized as knowers and as leaders because they historically haven’t been recognized as such. Historically, men are assumed to be the knowers, the leaders, to be ambitious, and so forth. While this is true, these roles come with their own pressures and double-binds—and speaks to the assumptions people make about how men should act and be. This recognition of male privilege and pressures makes the various issues that men face and that we face in the classroom teaching men different than in both women student bodies and co-educational environments.

But this is the great advantage of teaching at Wabash College. We are uniquely situated to think specifically about the issues that men face. While we tend to think of men and male privilege as the legacy of patriarchy as problematic, it turns out that these very expectations on men on how they should be men is also a significant challenge to them, to how they learn and to how they experience restrictions on how they should appear in the world. The Atlantic article we distributed points out how girls are praised for stepping outside of the gender script while boys are often harassed or bullied for resisting the expectations put on them for how to be men. We want to ask today, what would our teaching look like if it considered specifically the kinds of issues that men face in living up to a certain image of masculinity that demands that they not be like women, that they be tough, that they always be winning.

Men growing up today are caught in a double bind. Social pressures expect men to show up in the world in certain ways that they don’t really choose and yet those ways of showing up can be sources of oppression for others. One thing we can do in our classrooms is be aware of that. Another thing we can do is help our students become aware of them.  As we say in the history of philosophy, if you aren’t aware of the ways that your thinking comes as a result of a tradition you inherit then you are subjected to it and not able to consider whether you really want to accept it or think otherwise. Finding ways to recognize these social forces and pressures, understand how those forces work, and consider possibilities for resisting those forces is part of how we can help students be freed from those expectations.

Let me just give one example. Last semester I was teaching an upper division course on the work of Hannah Arendt. I spent considerable time in class talking to students about the connection between thinking better and discussion. After one class, a student I knew well came to my office and told me that some students in the class see discussion as a matter of winning. With some probing, I learned that some students plan for discussion by coming in to class with one point they want to say and then once they have said it consider their work done. When they are corrected in class, they feel defeated, and often say to one another outside of class, “She really got you.” Not all students approach discussion in this way, but it was useful for me to know more about how some students perceive what being a good student means. We often use “Wabash Always Fights” as a way to motivate students in the classroom, but this mentality might also be what prevents them from taking discussion as an opportunity to flesh out a problem and follow an idea without a clear predetermined course for where it will go and to think instead that success in the classroom is about defeating one another.

After I learned that they were thinking about discussion in this way, I was able to speak to it directly and discuss discussion and its purpose at length. Doing this in a course on Arendt made this easier since she speaks directly to the problems of seeing all thinking as merely calculative and goal-oriented and she encourages us to think about the unpredictable places conversation can go when people are genuinely talking to one another. But it was useful for me to know this in my efforts to prevent students from shutting down when they are not quite right in other courses. It helped me recognize and be responsive to a certain anxiety that is in play when they feel like winning is the goal and they aren’t winning. Here’s a place where I think women are permitted to fail and keep going in ways that our expectations on what it means to be a man makes it much harder and riskier for them to persevere when they aren’t immediately successful at the projects to which they put their hand.

The Teaching and Learning Committee planned this workshop on the topic of Teaching Men because we think that the expectations our students face for being men affect how they learn, how they engage in the classroom and how they think about academics generally. We were heartened by the responses of so many of you in our survey (distributed with our invitation to the workshop), sharing your insights into how these expectations are at work in the classroom and strategies for motivating students to learn. That’s what we want to discuss further [at the workshop].