GLOBAL LEARNING: When Global Learning Starts in the Local 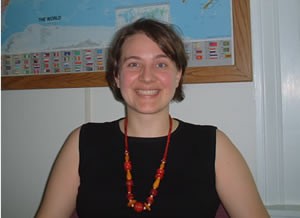 It is sometimes assumed that global learning requires engagement with a distant location, but our recent involvement in a new program at Allegheny College has shown that it can begin fruitfully in the local. The Global Citizen Scholars Program began in fall 2016: the program provides students with learning experiences in three areas – civic engagement, global learning, and U.S. diversity. The philosophy behind the program is that these areas combine to inform a global and committed citizenry who can think outside the box. Built on integrative learning, the program bridges the curricular and the co-curricular, all the while encouraging students to engage with diverse communities and cultures – not as passive observers, but as mindful participants. It also asks students to make sense of their itinerary through a digital portfolio on which they showcase their learning. The aim of the program is to allow students to acquire the skills and competencies to make sensible and sensitive decisions with contextual understanding in community as well as in their future professional life.

Three threads ran through the first semester of the program: the local context of Meadville; immigrants, refugees, and asylum-seekers; Islamophobia. They relate directly to the program areas of civic engagement, global learning, and U.S diversity, and inform and are consequential to each other: for instance, by learning more about Islamophobia, it is possible to understand better the challenges facing Muslim refugees, who have become the targeted subjects of controversial attempts by Donald Trump to impose a travel ban on residents in or from Muslim-majority countries, as they settle in the United States.

When asked near the end of the first semester why they chose to apply to the program, virtually all students said that it was the “global” aspect in name and dimension that attracted their attention. But virtually all the students also said that what had surprised them about the first semester was their civic engagement work in Meadville and how this had become a defining anchor for them: students participated in reading and world languages (French and Spanish) programs in the elementary schools, after-school programs, local agencies and foundations, community centers, and a soup kitchen. In our class meetings, we surveyed Meadville’s history and demographics; we read The Meadville Tribune; and we hosted a panel of local actors around the theme of “collective impact.” In other words, our initial focus was squarely on the local and “place-making.” Then we went further by coupling “place” with “displacement,” specifically by a plunge weekend spent at the Vive La Casa shelter for asylum-seekers in Buffalo, NY. In this way, “place-making” was disrupted through the stories refugees told about what pushed them out of their home countries, where they left behind family, friends, and employment.

At the end of the first semester, students in the program reflected in powerful ways on “place” and “displacement” through the lenses of the plunge weekend and their own relationship of place to Meadville. In addition, their comments responded to Taiye Selasi’s TedTalk,”Don’t ask me where I’m from, Ask me where I’m a local,” in which Selasi explores what it means to be from a place, naming rituals, relationships, and restrictions as those things that define and delimit belonging. Here is a sampling of what the students had to say:

Throughout the semester I have become increasingly involved in Meadville and I have learned more about its history and the people who live here. Watching the Ted Talk from Taiye Selasi was an eye opening learning experience for me. It caused me to think about what it necessary in order for me to personally feel like I’m settled and not displaced in an environment. As I listened to her speak, I thought about all I have learned about Meadville. Like she suggested, I thought about my daily rituals and where they occur. I thought about the relationships I had built with the people and physical places here. Lastly, I thought about what restrictions I have as a student at Allegheny and someone not originally from Meadville. Throughout this process and throughout the entire semester, I have greatly changed my definitions of place and displacement, and ultimately I think I have come to feel more and more like a “local” within Meadville.

This first semester in the GCS program has allowed me to learn about the Meadville community, and be civically engaged within this community. I have learned about different ways people and organizations come together to cultivate needed change within communities. These experiences in the local are a solid foundation from which to grow. On a larger scale, both problems and solutions to problems can have negative effects on different communities. I see examples of this at the Arc [the student’s civic engagement site] when, during the election, some members became hostile while commenting on the political situation; in this sense the national has affected the local. All of these concepts are interconnected. Moving forward I feel capable of critically thinking about more difficult concepts relating to civic duty in a global context.

It is not just that the local contains elements and signs of the global, forming what is sometimes called the glocal, but also that with no sense of how the local expresses itself and is organized, how people act and interact in the local, it is hard to move knowingly into the dimensions of the global. The whole of the first year was about “place-making,” which is transferable (or could we say “transnational”), and it demonstrated how it is possible to meaningfully scale out from the local to the global. As the final student reflection shows, there are portable lessons learned and observations made in a local context that transfer to a global one — namely, in this case, what will civic duty and being civic-minded mean in a global context?

Now some of the same Global Citizen Scholars will spend part of the summer in India, Italy, Moldova, New Zealand, Nicaragua, and Thailand; and next fall semester others will study abroad in Argentina, Australia, Chile, France, and Spain, where there will be local beliefs, knowledge, language, and practices. In other words, it is important not to lose sight of the local in the global. The students will hone perspective-taking as a skill and outcome that gets developed in and through global learning as they adjust to the street view in an unfamiliar context.

To conclude, it might be worth stating the obvious — that the local for students who move to a new college setting necessarily contains unknown and unfamiliar elements and is a displacement of sorts. But much of the self-contained nature of liberal arts colleges, in particular, makes the college campus a microcosm or world unto itself. We are misguided if we allow students to remain in its bubble, while at the same time professing that we are preparing students to be global citizens for the 21st century. But the first step might not be much farther than the college’s doorstep, which students can cross by committing to civic engagement in the local community. And with this initial outward, extroverted step comes an enhanced sense of social and personal responsibility, and a deeper understanding of place as it relates to practice and identity. Both of these are also essential to global learning. In our case, global learning started in the local, but already has students imagining themselves in the context of people, places, and systems on a world-scale.

Please send your written comments on this article to Gregory Wegner (wegner@glca.org) or Steven Volk (Steven.Volk@oberlin.edu), co-directors of the GLCA Consortium for Teaching and Learning. Your follow-up comments will be considered for inclusion in subsequent postings on this topic.