From Religious Literacy to Social Action: How I Discuss the Global Refugee Crisis Within Our Classes (Younus Mirza, Allegheny) 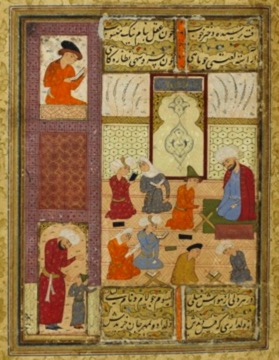 Question: Can site visits be used to teach interreligious engagement and democratic participation?

Every semester I take my students to Erie,PA to visit a mosque in order to help them connect many of the themes that we discuss in my Islamic studies classes and makes the course material more relevant.  Over the last two years, however, I having learned that the local Muslim community in Erie is primarily refugee, coming from either Iraq, Somalia or Bosnia, I have redesigned the purpose of the visit.  Since Erie is one of the few US relocation centers, it is expected to host a good number of the 10,000 Syrian refugees that will be accepted to the United States this upcoming year.  With the help of the Interfaith Youth Core (IFYC) curriculum development grant, I was able to transform my religious site visit to one that touched upon refugees, an issue that is relevant in our political discourse and on the minds of many our students.  My goal is to use the challenge of refugee resettlement as a living case study to teach interreligious engagement and democratic participation.  I do not want my students simply to learn about religious difference but rather be able to interact with people of different faiths for the purpose of contributing to the social good.

›In order to better understand the challenge of refugee resettlement, I decided last semester to visit an already established religious and refugee community, the Bosnian Islamic Cultural Center of Erie.  As we approached the building, we could not help but realize that the mosque was a converted church.  The Erie Methodist community had outgrown the building so they decided to sell it to the fledgling Muslim community.  After we entered, we were escorted into a large banquet hall and treated to Bosnian food and deserts, most notably the traditional bread and sausage dish, cevapi.

Once we were seated, a young Bosnian professional spoke about his memories from the war.  He vividly remembered the United States airlifting food to his refugee camp when he was four years old; it was the first time he ate peanut butter.  The U.S. would later help his family relocate to Erie where he became a successful engineer.  Others spoke on an personal level about their experiences in Bosnia and their transition to the United States.  One gentleman detailed how he was able to escape the genocide at Srebrenica,  eventually finding refuge in America.   After the presentation and discussions, we visited the prayer hall, kitchen and gymnasium and quickly came to realize that the mosque was not only a place of worship, but an entire community center.

The trip was a great success as it helped students see the current challenge of refugees through an historical lends.  In the mid-1990s, before the attacks of 9/11 and the rise of Islamophobia, the United States played a positive role in helping solve the Bosnian conflict and assisting the refugees find a new home here in the US.  The trip was further well-received by our campus community and several students expressed interest in making the refugee issue more paramount on our campus.  Several faculty members from our Peace and Conflict concentration also attended the event and brainstormed ways in which we could incorporate the Erie refugee community into our courses.

My trip is only one part of various initiatives that are going on at Allegheny regarding the refugee situation.  This past March, the journalism program organized “Welcome the Stranger”, a conference focused on refugee issues and published a variety of refugee interviews on the website.  Our Global Health program has included service learning projects for the local refugee population as part of their classes.  Important at a local level, Allegheny’s efforts can also be seen as part of a national movement to welcome refugees into our communities.  Guilford College, for instance, recently started a campaign to make “every campus a refuge” by hosting one refugee family.  While extremely heartbreaking, the global refugee crisis is nonetheless an opportunity for people of different religious and ideological backgrounds to work together for the common social and civic good. Well-thought out site visits can be a particularly mechanism for teaching these lessons.