For the full report contact Nestor Matthews at:  matthewsn@denison.edu 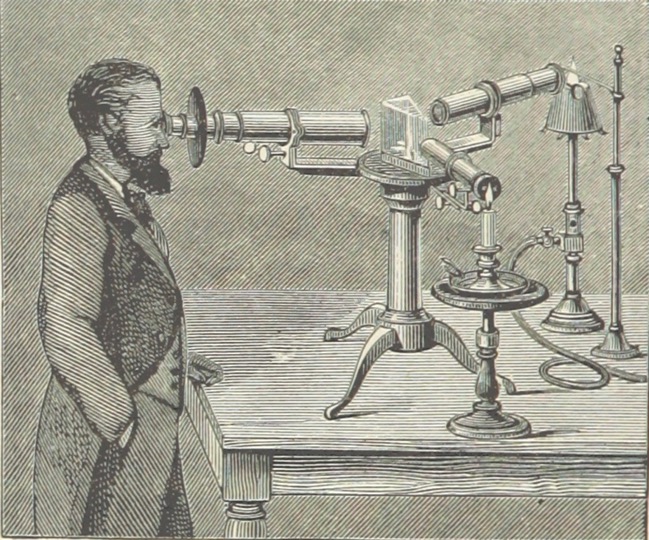 The Spectroscope, from “The Half Hour Library of Travel, Nature and Science for young readers” (London 1896; British Library)

Over the past few years I have adopted the teaching practice of flipping the classroom with video lectures. In 2013, I began requiring students to watch and take notes on my Sensation & Perception video lectures before each class. Subjectively, I experienced an immediate increase in the students’ participation. They had been prepared to speak…and they spoke…on topic! My subjective experience was corroborated by the students’ quantitative and qualitative feedback on the video lectures. But there was trouble in paradise. The increase in student participation had been uneven. Clearly, some students watched the videos; others did not. YouTube’s “analytics” for my video lectures were sobering. First, for some class periods, there were fewer YouTube viewings than students in the class. Second, for any given video, the mean viewing duration was often substantially shorter than the full duration. YouTube’s analytics don’t measure learning.

College should be about learning, not sleeping in front of my videos. TED-Ed (an online platform to develop and share original videos and interactive lessons) to the rescue! To address this limitation, I conducted an action research study using TED-Ed before each class period, but students now were required to watch my videos and complete an online Preparedness Quality Check (PQC). Each PQC contained five multiple choice questions randomly interleaved among ten open ended questions. Each multiple choice question generated instant feedback from TED-Ed, and did not count toward the student’s grade. By contrast, each open ended question generated no immediate feedback, but was available to be selected randomly within 96 hours for low-stakes grading (10 points out of 650 points for the course).

Therefore, my first learning goal was to increase student learning by distributing practice. This pedagogy distributed their practice in three ways. First, by randomly selecting TED-Ed open ended PQC items for grading throughout the semester, I promoted practice on the day before each class. An additional incentive to practice before each class came from the immediate feedback that students received on the TED-Ed multiple-choice PQCs.  Second, the TED-Ed open ended PQCs often were the center-piece of our active-learning exercises during class. Third, within 96 hours of completing our in-class activities, students received graded feedback on randomly selected TED-Ed open ended PQCs. In short, the students now received feedback on their performance before, during, and after class. This spaces their rehearsal.

In my fall 2015 Sensation & Perception (PSYC 340) course, students used TED-Ed to complete pre-class questions about my video lectures. These pre-class assignments generated the highest level of in-class participation I’ve experienced across 15 years of teaching the course at Denison. Beyond this, two other activities are noteworthy. First, I implemented TED-Ed Lessons in my fall 2015 Statistics for the Behavioral Sciences course (PSYC 370), in addition to my Sensation & Perception course (PSYC 340). Second, for both courses, the TED-Ed Lessons often entailed using the “Draw.to” website. This website allowed students to draw online graphs in response to specific TED-Ed questions. Students pasted into their TED-Ed responses the web links for their graphs, which I could review before or after class, or project live during class. Accordingly, instead of my lecturing about how various graphs might look, students discussed the graphs they had already generated before coming into what used to be “my lecture”. The technology facilitated student engagement. We had gotten ahead with TED-Ed.

To assess student learning outcomes in each of the two courses, I evaluated the correlation between TED-Ed grades across the semester and the seven outcome variables (e.g. class participating, final exam, retention). Fourteen out of 14 correlations were positive, and ten of the 14 positive correlations were statistically significant, a pattern not likely explained by chance variation. TED-Ed performance predicted “near transfer” (class participation & final exam grades) and “far transfer” (writing grades and metacognition scores). The significant correlations, however, could simply reflect “third variables” (e.g., conscientiousness and/or the academic rigor of the student’s high school) rather than or in addition to the nightly TED-Ed practice regimen’s effect.

Additional analyses revealed that, across the semester, students exhibited significant linear increases on such factors as internal locus of control and self-directedness. Although, again, further investigations will be needed to determine how much of the improvement arose from the nightly TED-Ed practice regimen, versus simple “maturation”.

Given the results of this project I will incorporate TED-Ed Lessons and the practice of including “Draw To” questions in other courses including Research Methods and Advanced Neuroscience. By contrast, I will likely omit or greatly reduce the number of TED-Ed multiple-choice items. Although TED-Ed’s multiple choice items provide immediate feedback and some variety, they are not generative. In future courses, I’d like to experiment with linking my TED-Ed lessons to videos created by others, and/or to various written resources e.g., wiki pages.

[Please contact the author for a full version of the paper including supporting charts. A PDF version of the poster (“Getting Ahead with TED-Ed”) he presented at the annual conference of the National Institute for the Teaching of Psychology (NITOP and its supporting materials can be viewed here.]