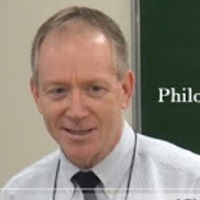 Professor, Philosophy and Religion; Director, Center for Teaching and Learning

In this essay I offer a brief report and some evaluative remarks on my own experience of a “flipped classroom.” I found the following definition of the flipped classroom on the web: “The flipped classroom is a pedagogical model in which the typical lecture and homework elements of a course are reversed. Short video lectures are viewed by students at home before the class session, while in-class time is devoted to exercises, projects, or discussions” (https://net.educause.edu/ir/library/pdf/eli7081.pdf).

This definition captures what is at the heart of the experience – class time is now available for exercises and discussions because the material, which I used to cover in class, is now available to the students in another form and at another time.

My interest in this approach was piqued because I had some pretty serious doubts about its effectiveness. Every new technology that has come along for the past 100 years has promised to revolutionize the classroom, and yet here we are with a blackboard, a lectern, and rows of students in front of us. The revolution had yet to occur, except on the margins – more screens are in our classrooms with greater opportunities for the use of audio-visual materials. I did not believe that simply recording my hour-long lectures and telling students to watch them outside of class, in addition to reading the text before class would be a step forward.

Indeed, it would not have been. That is not what a flipped classroom is, and this different understanding helped me to embrace it. Instead of recording whole lectures, one presents the main points in a shortened form with some accompanying text. All of the videos I recorded were about ten minutes long. Students can watch something for ten minutes and not get bored.

There was another reason for my interest. Last April I became the Director of the ICU Center for Teaching and Learning (CTL), and this meant that I needed to be more aware of and familiar with the use of technology in the classroom. I wanted to be able to speak to my colleagues knowledgeably, based on my own experience, about how one uses this technology and, more importantly, to address the question of whether or not the technology was genuinely advancing educational goals or was just some kind of fad.

So, after some discussions with Ms. Kobayashi, the Director of the CTL, and Prof. Miyagawa from MIT, I decided to try using CC Producer software to record some parts of my lectures in order that students could listen to them before class and use the class time for more discussion.

I want to walk you through the process. I will skip over the early failures and glitches. I will not tell you about how many times I had to record and re-record the first lecture. That is all part of learning a new way of doing things. Rather, I will lay out for you how it goes, when it all goes smoothly.

First of all, I was given an account for a software named CC Producer. This meant that I could log on to it from any computer and make the videos. All I needed was an internet connection and a computer equipped with a camera and microphone. After some initial experimentation, I settled on using the computer I have in my office, an iMac. Except for my voice being a little low in volume, it worked fine.

The process of producing a video went as follows. I began by making a Microsoft Power Point presentation. As Power Point presentations go, it was poor, having way too much text and not enough images or movement. But I was using it more as a textual summary of what I was saying in the lectures. I saved the Power Point as a PDF file and then downloaded to CC Producer. I quickly found that seven to eight slides, including a title slide, was enough for a 10-minute lecture. Once the slides were there I would turn on the camera and mic and begin recording. I simply lectured on the text, explaining its main points and trying to help students understand the parts that were difficult. Once I reached around the 10 minute mark, I ended it. Most chapters took two videos and a few took three.

When I was done recording, I checked the video and sound and then saved the recording. I then uploaded it to Moodle as a SCROM package. (For anyone unfamiliar with SCROM packages, as I was, just click on the “Add an activity or resource” tab on Moodle and you will find it.) Finally, I created a simple True/False quiz, consisting of five questions, also on Moodle. Students were to watch the video and take the quiz. They had one try at the quiz. I tried to make it as simple as possible. The quiz is, of course, graded automatically by Moodle, so there is no more work involved there.

From start to finish, making one 10 minute video took about one hour. In the course of the semester I made 29 of them. Once I figured out the workflow, that is, 1) make a Power Point, 2) download it, 3) record the lecture, 4) check it, 5) upload it on to Moodle and then 6) make a quiz, it got easier.

Let me make clear that once I got the basics down I did not need anyone else’s help to make these videos. It was just me and my computer working in my office. I never lost any work and there has not been one complaint from any student that something would not function.

How it Got Used

The course for which I did all this was the General Education course, “Introduction to Christianity,” which had around 90 students enrolled. The students viewed the videos and had to take the quiz before class started if they wanted to receive any points. I was very nervous about what I would do for class, since so much of my “material” was now on the web. I need not have worried – one can always go more in-depth with a class. They more they know, the more they can learn.

It turned out that Comment Sheets became a very important part of my class. I got excellent questions at the end of each class from the students and was able to spend the first 30 to 40 minutes of the next class answering these questions or responding to comments.

It did not change my teaching in any dramatic fashion, but I did feel that I was talking more to the students and less at them. In a class this size it was not possible for me to get a good discussion going, so I would often break them up into small groups of four or five and let them wrestle with the questions that the text had raised.

Another assignment that many students do are Learning Logs. I have a series of questions that are designed to help them reflect on their learning process during the course of the semester. Around the middle of the semester one of these questions asked about the videos and whether the students were finding them helpful. The response was overwhelmingly positive. Many said that they would not have understood the book without these video lectures. They appreciated the text part as well.

The most appreciative were those whose mother tongue was not English. They were happy to be able to view these lectures more than once and to have written text on the screen as I spoke. They could stop the video and take notes, or they could rewind it and hear a section again. All of this the students found very positive. The complaints centered on the difficulty of hearing my voice sometimes. They also admitted that the quizzes were an important tool in forcing them to listen carefully and not drift off. There were complaints that some of my questions were “unclear” or “tricky” and that this caused them to miss points.

In one sense it is still too early and the sample is too small for me to give anything but some impressions. Also, my own evaluation may change when I use these videos a second time. This time they were a lot of work but next time they will be no work at all. Overall, I would have to say that I enjoyed it. As I wrote above, I felt like I was connecting with the class better. They had the basic information that they needed to ask questions. I also was pleased at how positive the students were, positively grateful in some cases to have this resource to help them get through a course taught in English.

I do hope that other faculty members will give this a try. I think it could be a valuable way to help our students make the adjustment from their English for Liberal Arts (ELA) courses to a course taught in English. I do have a few recommendations.

First of all, if you are interested in doing this I recommend that you choose a course which you have already taught and material with which you are familiar. There is enough stress with creating a new course without throwing new technology into the mix. Second, it should be a course that has a strong “lecture” element in it so that you have the material you need to make the videos. Third, pick a time when you have some breathing space to learn the basics of how to make the videos.  Once you learn it, it is easy but you don’t want to be trying to master it if you are under a lot of pressure with other classes, meetings, and projects.